Buddhist Pagoda is the base of activities and propagation of Buddhism, a place where Buddhist monks and nuns gather to practice and teach Buddhism. Everyone, regardless of believers or non-believers, can visit, worship, watch or practice Buddhist rituals. In some places, the pagoda is also the place where the blessing spheres of true practitioners are kept and the monks are buried.

Vietnam Buddhism has existed and developed for nearly two thousand years, has gone through ups and downs with the country's history, and has affirmed its position in the hearts of the Vietnamese. The best way to learn more about Vietnamese Buddhism whose influence has played an essential role in forming Vietnamese culture is through Buddhist temples. Let’s find out the most famous Buddhist Pagodas in the capital city with Whatsup Vietnam!

Dubbed "the No. 1 natural cave in the South", Huong Pagoda deserves to be the most worth visiting when visitors come to Hanoi. Every year, this scenic spot welcomes more than 1 million visitors from all over the corners all year round, but the most crowded time is the festive season from January to March in the Lunar Calender. 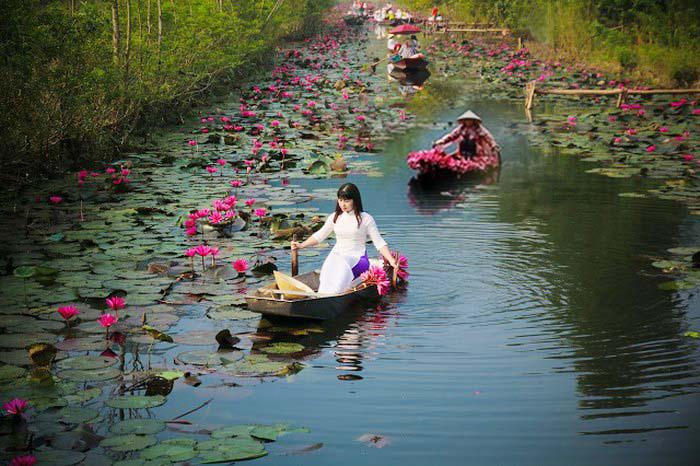 Located in My Duc district, from Hanoi city center, traveling by motorbike or car down about 70 km towards the west, you will arrive at the boating dock. Then rowing the boat along the romantic Yen stream, you will actually reach Huong Pagoda. On the Yen stream, you can contemplate the sight of waterlily blooming brilliantly, reflecting on the crystal clear water, and just bend down, you will see the thick moss interspersed, together with the at two sides of the stream are ranges of wrinkled mountains intermittently linking to each other. 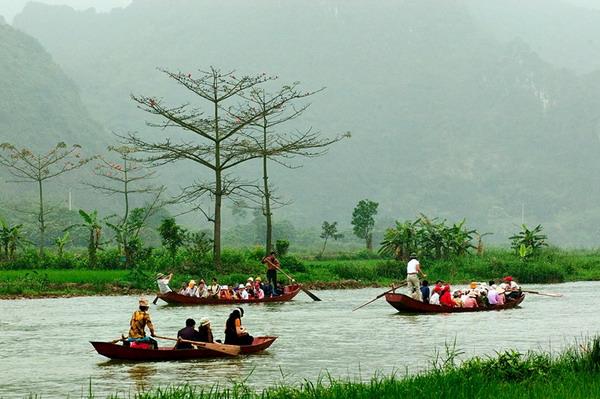 When the boat docks, you will have to walk quite a distance to reach Huong Tich cave. If you have been exhausted, you can choose to continue to travel by cable car to reach the top. Perfume Pagoda also has a different name is “In” pagoda because it is located in Huong Tich cave.

Huong Tich cave is described as a dragon by the people, and the cave's door is related to the jaw of the dragon with its wide crown, inside the immense and deep dragon. Inside the cave there is perfect symmetry. In the middle of the dragon's mouth is the Rice Paddock made of stalactites that are like the tongue of a dragon. Like other caves in Vietnam, Huong Tich cave also has many stalagmites and stalactites with strange shapes hanging from the top.

Every year, when spring comes, Huong Pagoda is busy with pilgrims on the Buddhist land to offer sweet-scented flowers, wishing for a peaceful year sailing smoothly waiting ahead.

One Pillar Pagoda is the temple which owns the most unique architecture in Asia. It is considered one of the most ancient buildings in Hanoi and is a symbol of Hanoi’s thousands of years of civilization. 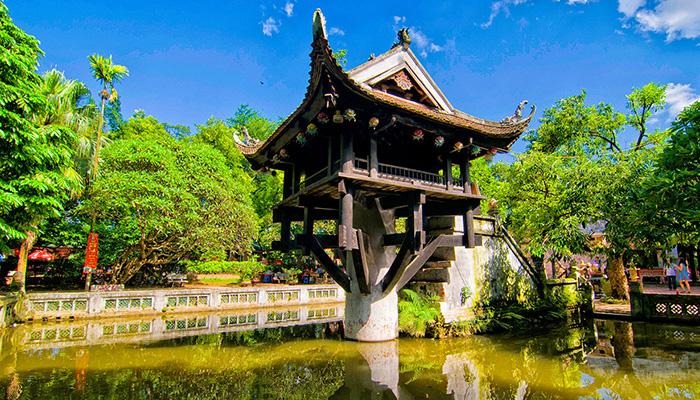 Architecturally, One Pillar Pagoda has a simple design but bears humanity character as well as the yin and yang pribciple of the five elements. The pagoda was built by a square block outside, which symbolizes yang, while a round pillar inside to support it symbolizes yang. There is yang in yin and vice versa, yang supports the yin, yin and yang are in perfect harmony just as heaven and earth. The four corners of the temple roof are shaped into a dragon's head. 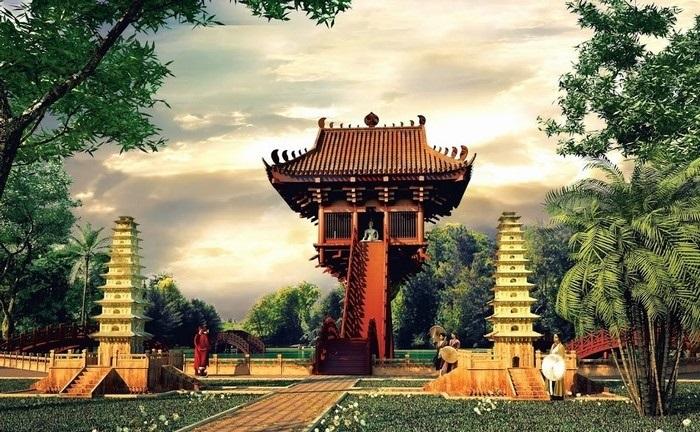 One Pillar Pagoda was built on a lake; in the lake is planted a lot of lotus to represent what is most pure and elegant. The temple both bears the beauty of majesty, solemnity and elegance, gentleness. At the top of the pagoda in the center position stands the statue of Quan Am Bodhisattva on a giant red-painted lotus calyx.

Tran Quoc Pagoda is one of the oldest temples in Hanoi. Located in the middle of West Lake, this temple is dubbed the "A pearl in the West Lake". With the historical value as well as the taciturn beauty, Tran Quoc Pagoda is a cultural heritage that needs to be well maintained and preserved. 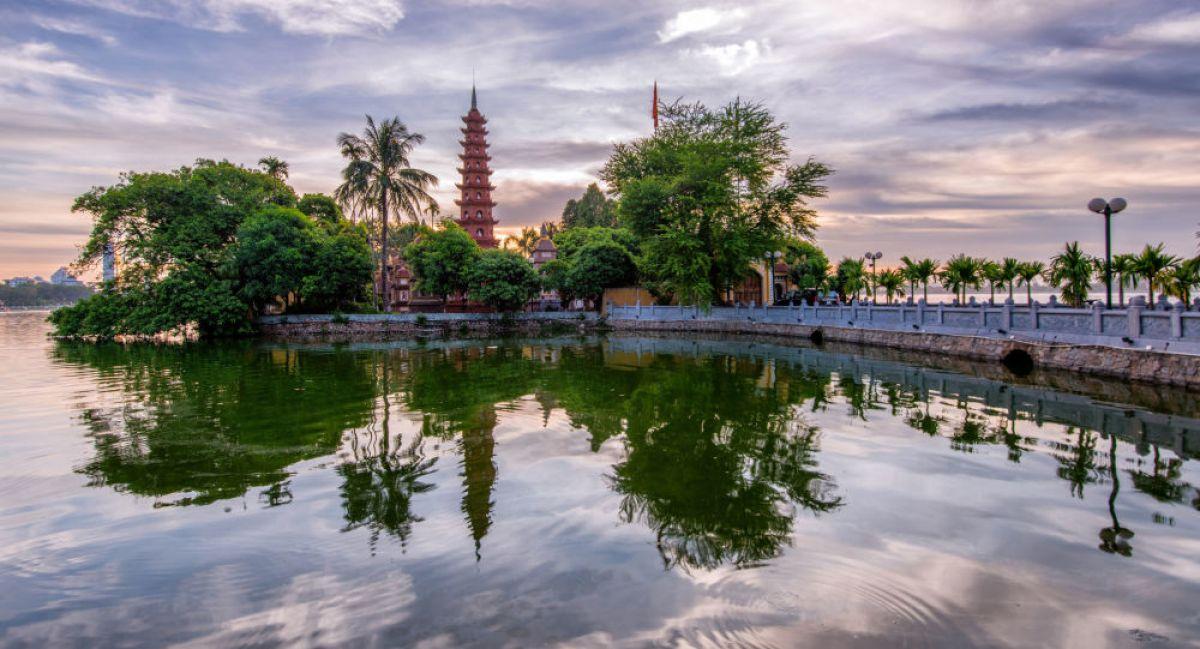 The entrance to the pagoda is on Thanh Nien street, opposite to Truc Bach lake in Tay Ho district. The pagoda has a exceptional and harmonious architecture, together with the stunning surrounding natural landscape, creates an awe-inspiring landscape picture. The temple has many Buddha statues ranging from large to small sizes. The highlight of this temple is the green tower which was built in red in the middle of the temple. In front of the temple gate sits a large Bodhi tree, which is a branch extraction from an ancient Bodhi tree given by the India President in 1959. 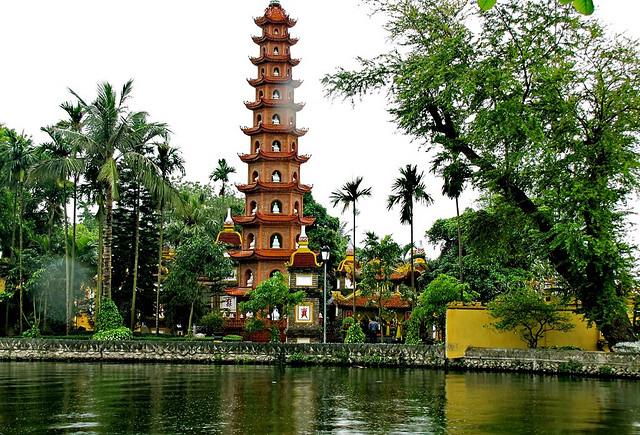 Since ancient times, Tran Quoc pagoda has been a place where the kings used to visit frequently to enjoy the scenery, write poems, discuss national issues or celebrate New Year. These days, the temple is also a well-known destination for tourists to visit and burn incense to wish for a life of prosperity and peace. The pagoda has been classified as a national historical - cultural monument.

Quan Su Pagoda is a temple located on Quan Su Street in Hoan Kiem District. This is a famous sacred temple and is considered to be the headquarter of the Vietnamese Buddhist Sangha. This temple was built in the 15th century and since then, over 6 centuries have passed, this ancient temple has witnessed many remarkable historical events of Buddhist Sangha of Vietnam as well as Vietnam history in general. 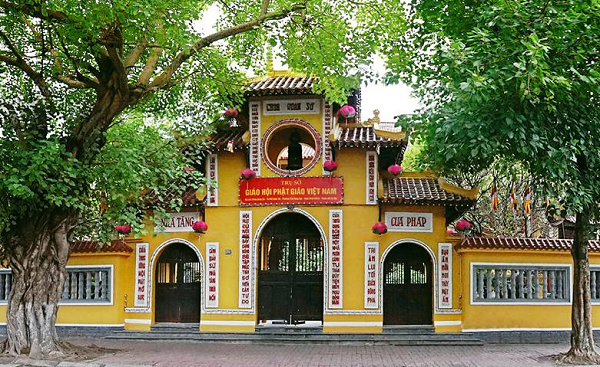 One special thing in Quan Su Pagoda is that all writings in the temple are in Quoc Ngu (the Vietnamese national language). On the first day and the full moon day of Lunar calender, particularly the Buddha's birthday, the Buddhists from all over gathered here, so crowded that it blocked a long road. 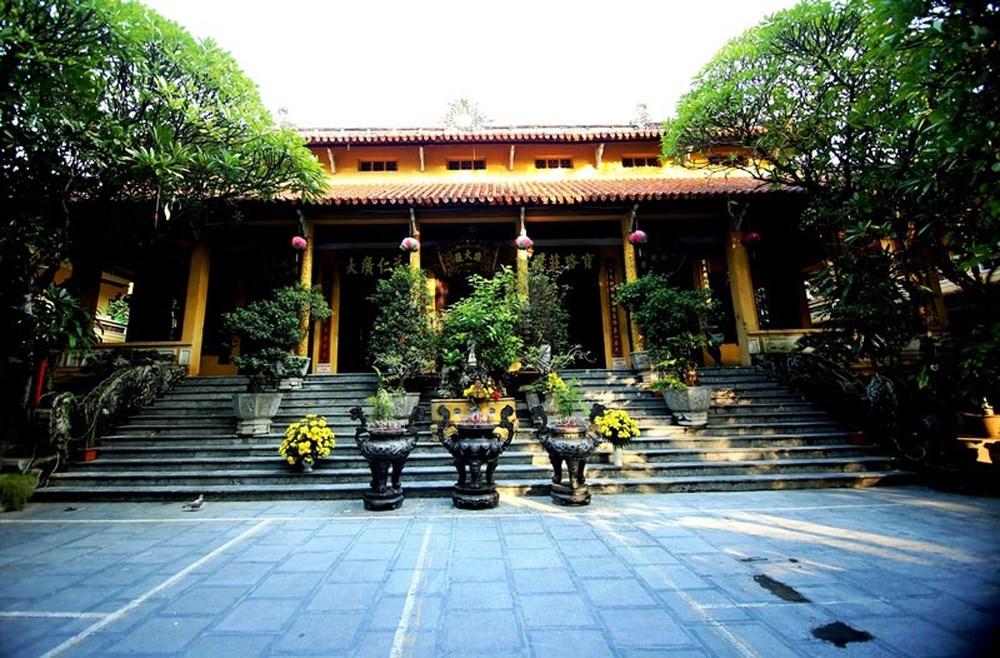 If you are a tourist who loves spiritual tourism, when paying a vit to Hanoi, you cannot let Quan Su Pagoda without in your journey. Someone used to say that if you have not been to Quan Su Pagoda, you will be considered not having been in Hanoi.

Kim means golden and Lien means lotus in Vietnamese, so "Kim Lien" means "Golden Lotus". The name of the most ancient temple in Hanoi has a symbolic meaning for the elegance, nobility, and secularity of Buddhism. The temple could be compared to a golden lotus located in the heart of Hanoi.

This temple is situated on Nghi Tam street, on the bank of West Lake, in Tay Ho district. Legend has it that this was the place where princess Tu Hoa, the daughter of King Ly Than Tong, and her female servants planted mulberry trees to weave fabric in this place. The name Nghi Tam is also named according to that.

The pagoda was built under the influence of old palace architecture. On the pillars, roofs and arches, there are carvings of dragons and phoenixes symbolizing the majesty and splendor of the royal court. Other parts of the pagoda are built entirely from rare woods, which cannot be destroyed by termites. At present, this structure is still carefully preserved and classified as one of the historical and cultural relics that need to be preserved of Vietnam.

Lang Pagoda is situated on Lang Thuong street in Dong Da district. The temple was built in a fairly expanded campus, having a large number of ancient trees and it has quiet and peaceful atmosphere as can be normally found in sacred places. The surrounding fresh green trees and fresh air lead the visitors to feel a sense of calmness and peace, putting the troubled souls at ease and comfort.

Lang Pagoda was built during the reign of King Ly Than Tong with the purpose of worshiping Tu Dao Hanh, a religious monk who was reputable for his exceptional virtue. In the temple, there is a statue of Dao Hanh woven from bamboo rattan, covered with a layer of paint in order to keep it intact over the years. In addition, there are 15 stone steles in the temple yard.

Each year, the temple attracts a large number of tourists to come and burn incense and do sightseeing, satisfying the curiosity to gain more knowledge about a famous historical temple. Currently, the temple has been through several restorations but still bears an ancient and nostalgic sense.

Going to pagodas at the beginning of the year or the full moon days of the Lunar month is a long-standing culture of Vietnamese people in general and specifically to the North, this custom is indispensable.

Above are the most worth-visiting ancient temples in Hanoi capital city. Please pay them a visit to feel sense of authentic peace and relaxation in your soul!