Hanoi and twelve seasons of flowers explore a romantic Hanoi

You may not realize the flower season until you suddenly see it glowing on every street. Whatsup Vietnam would like to introduce to you Hanoi of a more romantic version, which is a Hanoi immersing in the colors of consecutive monthly flower. This has been mentioned in the song named "Hanoi twelve flower seasons" by Giang Son, a famous Vietnamese songwriter

January, peach blossoms welcome spring with the sense of an ancient smell and feeling it triggers. Spring comes, peach blossom display its fragile pink petals in the drizzle. Someone has said that if Vietnamese New Year comes without peach branches, spring air will also lose half of its entirety. Following the spring, the first peach branches were also on the old bicycles, bringing the atmosphere of spring and of a New Year to every corner of the capital city.

2. February is immersed in the mountain ebony, dying the whole streets in purple

February, month of the mountain ebony. Not a flower originating from Hanoi, but the ban flower has attached to Hanoi life and become close to this land. In spring, the flowers bloom purple on the street and will stay for about 3 weeks before leaving the branch.

March and Sua flower. Suddenly one day walking on the street, you will realize that the trees standing silently during the winter blossoming in a pure white color, that means Sua flower season has come back to Hanoi's street.

4. April with fragile petals of lily covering all the walking paths

April, lily will be waiting down the streets. Flowering season comes quickly and goes fast as it has come. Sometimes when people even have not realized the flower season has returned, the petals of the lilies have started fading away. From the house to the narrow alley, from the 4-floor house to the luxurious villa, on the basket of the ancient bicycles to the elegant high-class car, in the usual porcelain vases or expensive crystal vases, lily is still authentically simple, humble and noble.

5. Flamboyant burns red a corner of city in May

May is violet by the color of Queen's crape-myrtle and color of flamboyant glowing red in a corner sky of summer. This is the special flower season of the student years, the flower season of the exam season, and the school farewell season. When the Giant Crape-myrtle blooms all the way, the phoenix flowers is awaiting for their turn. That the Queen's flower is gradually turning pale along with the first rains of summer is also when phoenix flowers burn their best in the summer sunlight. 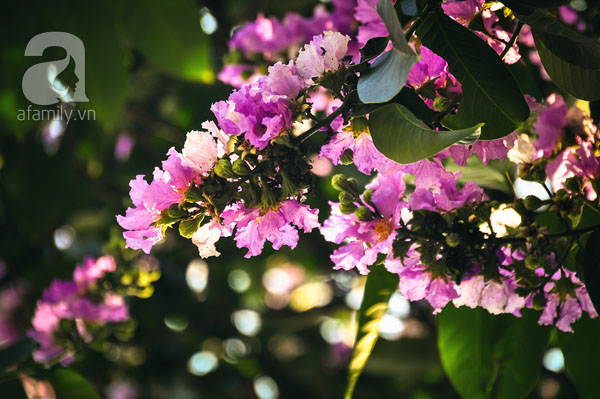 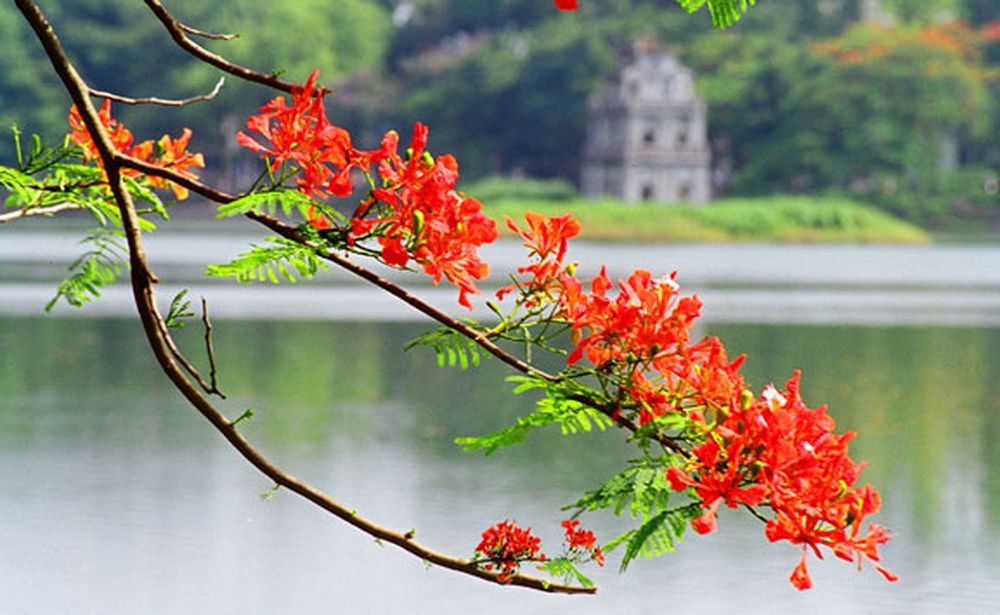 6. West Lake is fragrant in the aroma of lotus blossom when it comes to June

June, nothing is more beautiful than the Vietnamese national flower - lotus. From 4:30 in the morning, the lotus-pickers had cleverly swamped boats in the lake. Large and slightly blooming lotuses will be picked first. Partially picked flowers will be bundled and sold to those who come to buy flowers early, while the rest will be brewed with fresh tea. Others will be separated the pistil only which is to brewed with tea. In the shack on the edge of the lake, the delicate lotus petals give off a sweet fragrance. In the early summer of summer, coming to the lotus lake, enjoying the lotus aroma, making a sweet aromatic lotus tea and contemplating the tranquility and and peace in West Lake can be compared to doing the most amazing things in life! 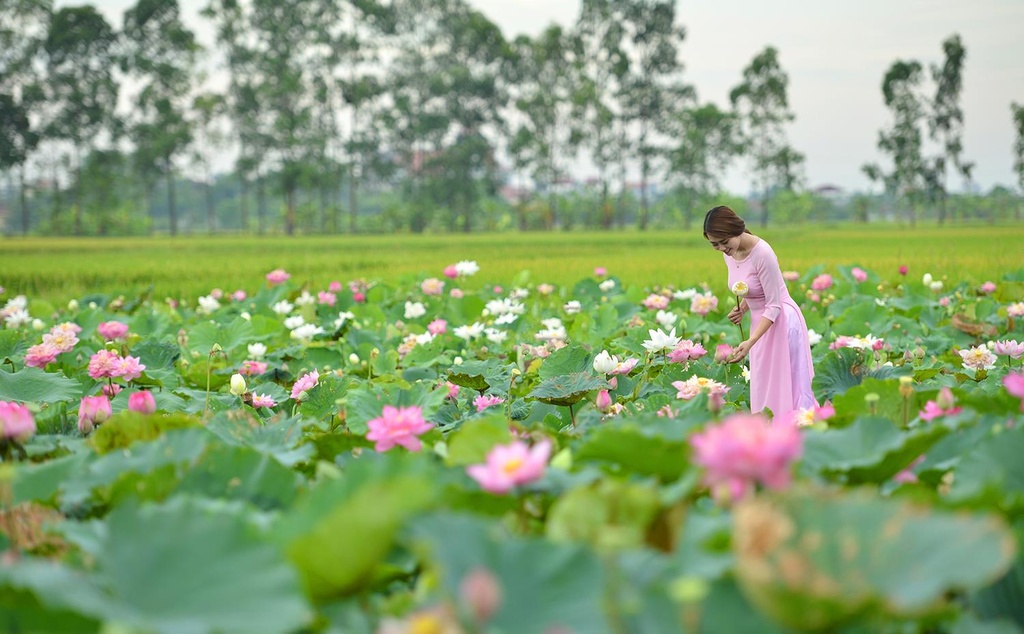 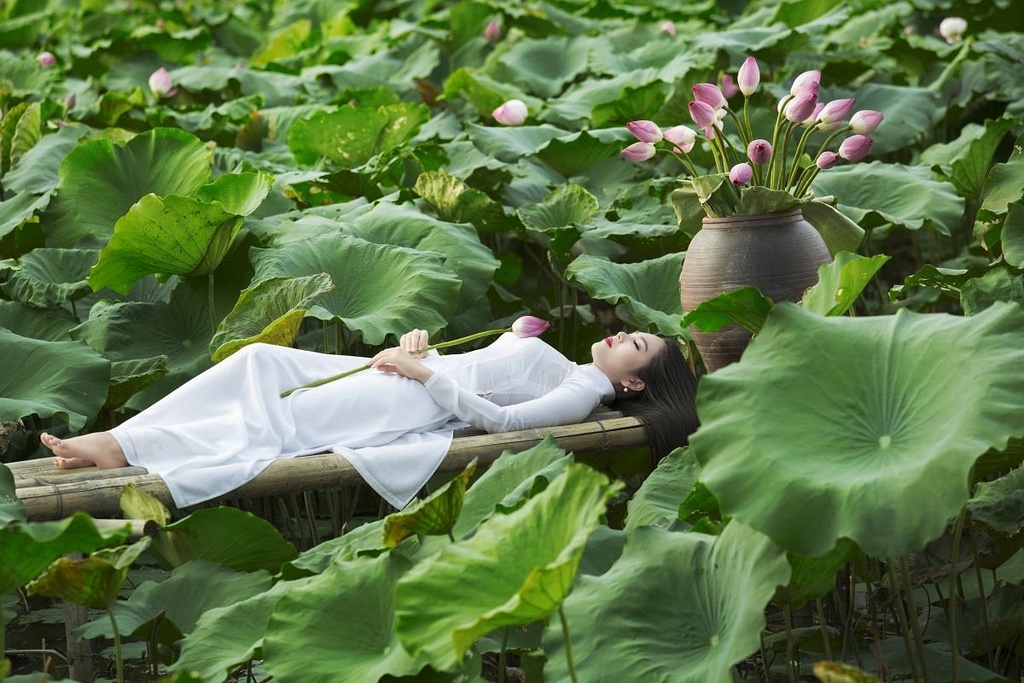 8. Chinaberry tree flower blooming in August days guides us back to our childhood

August, back to childhood with chinaberry tree flower. Chinaberry tree flowers are pure, tiny, rising to the blue sky. When the rain falls down, the falling flowers whitens all the summer streets. Summer noons, going out on the road, watching every cluster of white flowers proudly rising to the sky, the white color of the flower is exalted on the background of green leaves looks cool and fresh, just like the summer boiling heat has been softened considerably.

9. September is ecstatic in the passionate aroma of milky pine flower

10. Autumn has come in the way, comes the season of tiny white daisy as well

In October, this autumn flowers bring a sad feeling for the days before the cold winter. Daisy is a persistent charaarcter, because the vase of daisy flowers is still fresh even two weeks have passed. Tiny daisy brings with it the sadness and sorrow of the person who gets lost and disoriented on the crowded streets.

November, Aster amellus. Purple on the carts, aster amellus wandering through the street on cold winter days. The gently thin petal has a long and intense vitality. The appearance of of this beautiful flower only lasts on the streets for about two weeks and then disappeared, before the true cold winds of winter rushing past.

12. Winter days is dyed in the brilliant yellow of rape flower

December is the time of rape flower flowering along the riverside. Hanoi has a special season alternating between cold, gloomy winter days, which is the rape flower season. From the end of November,  the yellow flowers have flown in a corner of the garden, swaying in the breeze, on the laughter of girls, in the streams of girly hair and in the hands of new brides.

"I love the colors of flower…

It is the nostalgia when people are away from home

It is the desire to returning day

To see that we are still naïve and young

I love the colors of flowers…"