Discovering Dalat Elephant fall (Lieng Rowoa Waterfall): the third largest waterfall in Lam Dong Province. This is also one of the most attractive sights in Dalat. Located on the road to Nam Ban town, Lam Ha district; and the distance from the city center to the fall is about 25km southwest. Let together with Whatsup Vietnam learn more about this stunning waterfall.

A beauty completely devoid of human intervention. A wild beauty like the same messages of the plateau. Elephant Falls, also known as Lieng Rowoa waterfall, is one of the beautiful waterfalls of the majestic highland mountains with the height of over 30m, about 15m wide, not far from Linh An Temple.

1. Where is Dalat Elephant Fall?

According to the K'Ho chieftains who has lived here for a long time, he recalled that: A long time ago, there was a chieftain of Joi Bieng village. He had a beautiful daughter, and every time she sang, the flowers would bloom, the leaves of the forest would stop rustling, and the birds would also stop singing to listen.

She loved a man who was the son of the next village chief. He was also loved by many girls because of his giant and strong physique; a handsome guy with a gritty personality; he was courageous and did not mind sacrificing for the great meaning. They fell in love with each other, swearing for love and a happy marrige later on. One day the young man had to go to kill the enemy to protect his village, but even after many years, there was still no sign of his coming back anymore. 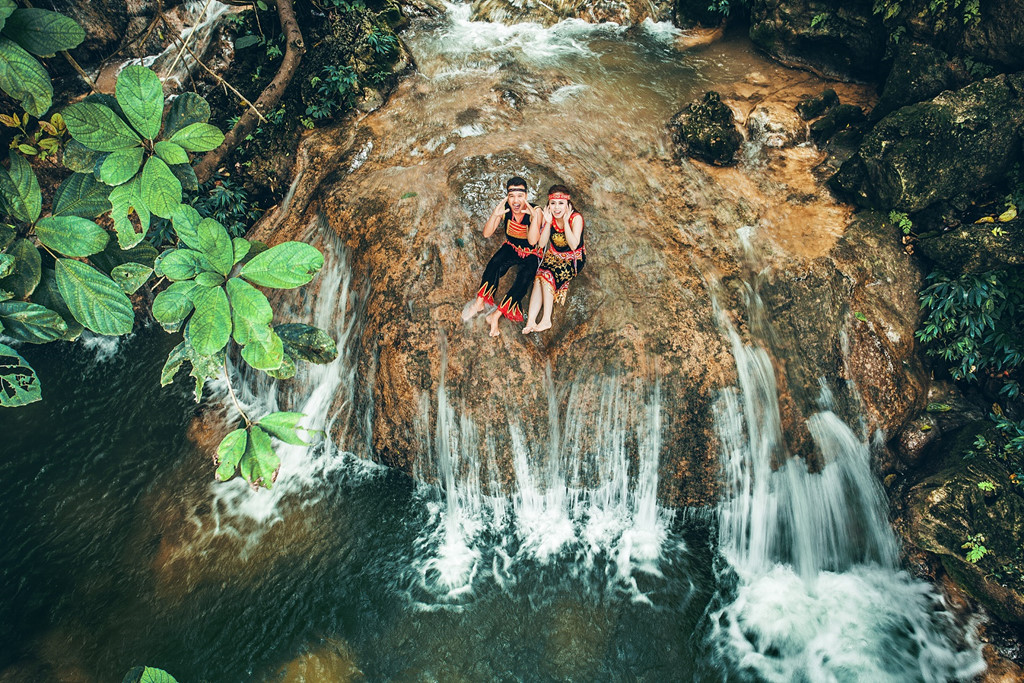 She was distressed looking to where they used to date; singing earnestly, hoping he would hear it. Then all birds were touched by her honest and loyal affection to her lover. They asked each other to fly away to search for news and then let her know. He died in the battlefield forever and would never return. In the midst of her agony, she kept singing her deep carpet until she was exhausted, collapsed and never got up again. The forest elephants that had long heard her beutiful voice also petrified. There was a loud bang that shook the earth and sky, making the deserted mountain split in half; horizontal fracture into a large waterfall flowing endlessly, its white intense water flows seem to whiten a corner of the sky.

The sound of the night waterfall and the rustling sound of the mountains and trees, and the singing of birds continuing to mourn the laments of a beautiful, faithful female. To commemorate this sad story, the indigenous people of K'Ho here named the waterfall Lieng Rowoa Joi Bieng - The waterfall of the petrified elephants in front of endless and loyal but tragic love.

It would be such a shame to come to  Da Lat  - Lam Dong without going to the countryside of Nam Ban to witness the majesty of the mysterious and spectacular Lieng Rowoa. Tourists who want to fully enjoy the wild beauty of the waterfall must "conquer" the 145 steps of stairs. When the natural stone steps "eat" the craggy cliffs, sometimes the planks of the beautiful wooden bridge protrude on the edge of the abyss.

At the foot of the waterfall and in the old forest appeared some large rocks shaped like elephants. Therefore, the sound of the waterfall makes people enjoy having a herd of elephants racing or launching a fountain playing with each other. When you reach the foot of the falls, behind the white waterfall, you will see a dusty ocean of cloud, and a deep, mysterious cave full of mysteries. It is Bat cave deep 50m into the ground with cliffs having very peculiar shapes and colors. The roots of the trees and vines interweave, creating a very strange and bizarre path. The deeper the cave, the darker and cold the cave makes visitors feel interested and curious.

Dalat Elephant Falls and Linh An Pagoda are two famous tourist destinations that are always mentioned because they are located close to each other, facilitating its visitors' journey.

First: You should go in the morning when it is in most stunning state. Coming to the waterfall, surely your tiredness will disappear due to the gorgeousness of the waterfall. You should be careful if there are young children because the road to the falls is quite slippery due to the wet all year round.

If you are keen on taking a little bit risk, you can climb the cliff to get a once-in-a-lifetime experience, but the sincere advice is that you should not climb out because it is very dangerous.